People today use their eyes more than any other sensory organ. Around 80% of the information we receive from the environment comes through our eyes. If the visual organ becomes diseased, it has an incredibly significant impact on how it functions. Eyesight will be limited or the eye may in the worst-case scenario fail completely. It is therefore important for your eyes and eyesight to be reviewed by a doctor regularly.

Anatomy of the Eye 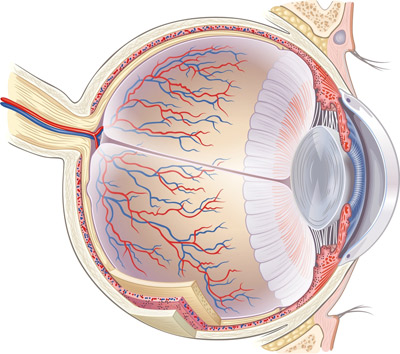 The layout of the eye is often compared to that of a camera. But the eye is much more, as the retina has a direct connection to the brain. Medically, it is divided into the anterior and posterior segments. The anterior segment is composed of the cornea and the lens, which focus the incident light. The retina is found in the back of the eye and it is on the surface of the retina where an image is projected. Here is also located the vitreous humor, which consists of a gel-like substance. The eyeball itself is surrounded by three layers. The fibrous tunic is composed of the sclera, cornea and conjunctiva. These are closely interlinked with each other and form the boundary and protective cover of the eye. The vascular tunic is composed of the iris, which includes the pupil, along with the ciliary body and choroid. The circular iris contains the pupil, which determines the optics of the eye. It is only in the inner layer where the retina is found and an image is projected. Six eye muscles are used to move the eyeball.